Well, we thought we sorted out Barclay's bank yesterday. Remember the £500 we were supposed to have access to a week ago? (Yes, that's right we've been here a week already, and we still haven't seen the Queen or Big Ben and only had a fleeting glimpse of the river while rattling over it in the train last Sunday)

Well Margie's cheque arrived in the mail this morning, but yesterday's effort at the bank had only confirmed that an account had been opened in Margie's name and that the book and details would also come in the mail. Margie confirmed all her ID etc yesterday and was given an account number. So, my plan this morning was to go back to the same branch of the bank (2 trains and 2 walks away) and go to the same girl who helped us yesterday and ask her if she could arrange to have the cheque deposited into Margie's account (Margie being at work). I really enjoyed the train rides, a chapter of my book, (Yes, I've really changed - I walk, catch trains and read books!) I smiled as I walked passed Sherlock Holmes again, and headed up to the bank. Of course, since Murphy's Law is hard at work here, (ie - nothing is as simple as it seems, and anything that can go pear shaped, will,) the same girl was not there, and no one would let me deposit a cheque in Margie's account since I wasn't Margie, and I didn't have the deposit book which is still coming in the mail.

So I rang Margie at work and decided to bring the cheque to her at work and go after she finished to a bank. I was anxious to get it deposited today, because yesterday they said it would take 3 working days for cheques to clear, so I figured we'd have access to the money by the week-end - only 10 days after we originally expected. 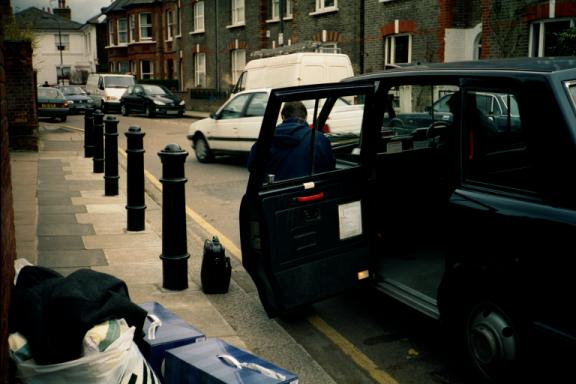 Well this little excursion opened the way for another first London experience. Margie's boss gave her money for a London cab ride! She was given all the linen etc for the next victims from Australia who arrive in the morning, so we carried it all to our apartments by cab. It was fun to experience, but much slower than the trains - but then it is door to door, and you miss all that exercise. So we off loaded all that stuff and walked briskly up to our nearest Barclay's branch, hoping it didn't close at 4 because by now it was a few minutes after. It closes at 5, so we were safe, and they were happy to take the money from Margie. Hooray! Not so fast. I asked when the cheque would be cleared, and she said, '5 working days, and since it's after 4, that will be taken from tomorrow, Thursday, so you'll have access to it by Friday week!' I couldn't follow her math and gave up getting stroppy with bank staff, because the original problem has nothing to do with them.

So Visa and MasterCard will continue to support us, until we can use the money on the 23rd, having been told we'd have it on the 7th.

No big deal really, I guess this stuff happens all the time, but it seems accentuated here, when to negotiate these things one has several train rides and walks, only to be told, 'Not possible on Wednesdays, unless you're wearing black and have blue eyes.' British bureaucracy! - rules rule, and even bananas go pear-shaped here!

Anyway, my other plans for today went well and truly out the window. After the bank my plan was to head to Kathy's office to get online and send more emails etc. So again I lugged the computer all over London, and up and down all those Tube station stairs and didn't even get to check my email!

On the brighter side, I spoke to the Principal of a school in Chelsea, and I'm seeing him tomorrow, and one of the agencies rang to sang they have a school who wants a music teacher 1 day a week, and I'm going there next Thursday to do a demo lesson and have an interview. (That one is 4 train rides and 2 chapters of my book - so we'll see if that's viable - at that rate, I'd be buying new books quite regularly)