The National Express has a Bus stop right outside our block of flats for buses to Portsmouth, so we enjoyed the convenience and went in search of from sea. It was a very cold day, but glimpses of blue sky enticed us out. From the bus we passed several scenes where the light snow from the previous weekend still lingered in fields, and on roofs. We've certainly had a lot of white around lately, with heavy frost on our back lawn remaining unthawed for days (But no snow in London to speak of, so we were thrilled with the white scenes out in the country.) 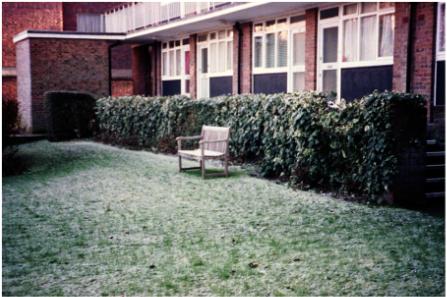 We expected the temperatures to be a little milder on the southern coast, but not so on this day. It was our coldest UK experience so far. A water feature in the new shopping development was actually an ice feature, with stones strewn over the surface in vain attempts to crack it.

The highlight of the day was an enlightening guided tour over the 'Victory'. It makes history come alive when you can see and hear how men, women, and children lived and fought in such conditions. My biggest surprise was to learn that a crew of more than 800 manned this ship - it makes our tiny Putney flat seem like a palace.