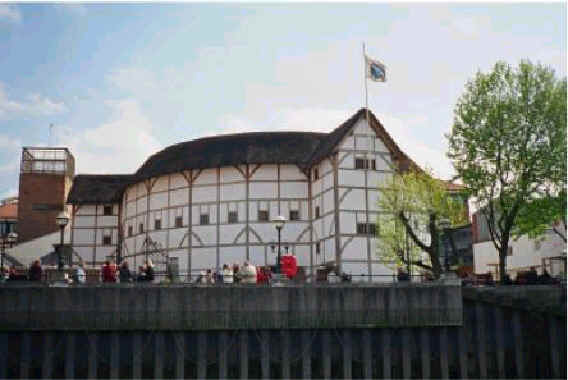 Clarify your Vision: Visit the Theatre.

Fancy a visit to the Globe Theatre in London? I did, and was fortunate enough to do so in May 2002. But interestingly enough, my experience didn't match that of countless others who have visited since Shakespeare's original Globe was built in 1589-9, or, over 400 years later,  as thousands visit the re-constructed Globe Theatre each year. My visit certainly won't count for much at all, because I merely photographed it as our ferry passed by on the Thames! How much more significant my impression would have been, if I had attended a performance as a member of an audience. Or even more so, if I had the talent and opportunity to play a major role in one of Shakespeare's plays in that authentic setting. Alas, that is "not to be", there is no question! And speaking of significant roles, what about Shakespeare himself? His role surely surpasses all others at the Globe.

Similarly, there are diverse roles to be played in the drama of worship and in the ministry of music. All too many merely observe from the outside, as spectators, with only passing interest, while others perform far more significant roles.

What is your role?

In the search for a guiding vision, we must seek a clear picture of our role as musicians in music ministry. Since music has always been significant in worship, we must particularly clarify the role musicians play in worship. A picture that can help us here is that of the Drama.

For many years, I have been helped by the famous observation by Soren Kierkegaard (1813-1855), a Danish theologian, who likened worship to a drama, but called for the Church to recast the roles. The prevalent concept, where an elite class of liturgical leaders acted out the drama of worship, prompted by God, to an audience formed by the congregation, was to be decried, according to Kierkegaard. Rather, in his oft-quoted model, he said worship should be seen as a drama where God is the audience, the liturgical leaders are the prompters, and the congregation are the actors. As one brought up under strong teaching of the priesthood of all believers, this emphasis rang true for me, and so for many years I have advocated Kierkegaard's concept.

Contrast this common practice, with that advocated by Kierkegaard.

In our spectator-prone society, Kierkegaard's concerns seem even more relevant than they were 150 years ago. It is certainly pleasing that congregations are more and more aware that theirs is an active role in the drama of worship. To emphasis this, I have long been an advocate of congregations coming as worshippers to church, rather than simply coming to church to worship, and thereby exercising their priestly role as the actors in the drama of worship. To have worshippers coming to church expecting to be active participants as 'actors', is surely a step in the right direction.

True worshippers in coming to church, continue the daily expressions of their hearts and lives, joining together with fellow members of the Body of Christ, glorifying God and seeking to please and serve Him, as prompted by the worship leaders. This is surely a good thing and is far better than congregations flocking to church for periodic doses of religious entertainment and pep talks. Despite it's commendable emphasis on congregational participation, and de-emphasis on the performance of the 'Up-fronters," I have some concerns about this model. Of course, all models fall short of the ideal, but I am coming to see that Kierkegaard's falls dangerously short.

Firstly, I have to ask:

It is good that we recognise that God is the object of our worship, and that the so-called 'Worship Service' is an opportunity for us to express our love, praise and adoration to Him. And we certainly must get away from the concept and practice of Services that are just for our enjoyment. But God is surely more than the audience. He is more than the object of our worship, He is the subject as well. He is the author, and finisher, the beginning and end. He is all and in all. We mustn't diminish the incredible prompting role that God has done and continues to do in drawing out our love and our worship. God still prompts. He energizes, enables, inspires, leads, directs, as well as receives, delights in, and is glorified by true worship. It is all because of Him, for Him, by Him and through Him. [We will see more of this in a later chapter on the Picture of the Trinity.]

Secondly, I also have to ask:

Certainly it is good that we get away from the entertainment model, where worship is no more than a performance on stage by musicians attempting to attract and entertain an insatiable and critical crowd. But I see danger in a model of worship where we are encouraged to think that worship all depends on us, and that the congregation feel that they are the performers, and God is sitting back being entertained by our efforts. Do our efforts in fact please God at all? We'll look more at this question later, but for now, listen to the Psalmist (Psalm 50:7-15) " I am God, your God...I have no need of a bull from your stall or of goats from your pens, for every animal of the forest is mine, and the cattle on a thousand hills. I know every bird in the mountains, and the creatures of the field are mine. If I were hungry I would not tell you, for the world is mine, and all that is in it. Do I eat the flesh of bulls or drink the blood of goats?"

Do we really believe that the drama of worship is simply an expression by congregations, prompted by appointed leaders, to please the God who created, and owns, and is, and is in, all things? There has to be much more to it than that. Idolatrous, pagan worship is such a striving for worthy human expressions that placate their god.

Surely there is more to worship than the Audience / Actor / Prompter model.

In practice, I know many Worship Leaders prepare meaningful Worship Services, guided by the Holy Spirit and led by Him, to prompt the sincere and open hearts, minds, and wills of true worshippers to lift up expressions of genuine love, praise, and worship to God, in response to and because of all He is and does. I know this does happen, and is perhaps happening more and more around the world. So how can we present a clearer picture of the roles in this process, so that our guiding vision can lead us to fruitful music ministry? The Drama Picture is still useful, but I think we need to expand it.

Expanded Model of the Drama of Worship.

In this expanded model, we can see more clearly that the Triune God is at the heart of true worship. No longer do we see human nature trying to somehow lift itself up to glorify divine nature. Rather, is all about the Triune God. [More in later chapter].

As musicians, we do have an important role to play in worship, but I think it is dangerous to elevate that role too much. We are certainly well away from 'centre stage' - only Christ can occupy that place in worship. But in His grace, He gives some abilities that equip them for slightly more demanding roles in this drama. Musicians may be called to serve in accompanying roles, principal roles, or supporting roles, but we are still just participants, along with all the congregation, responding in love, to the One Who is Love. God's plan is beyond anything we could imagine, but in it He has chosen to include us. In order to include us, He has provided a way for us to come to Him, to commune with Him, and to worship Him. This can only be through Christ, by:

We can therefore come, clothed in His righteousness, into fellowship with God and with His People, to worship Him in spirit and in truth.