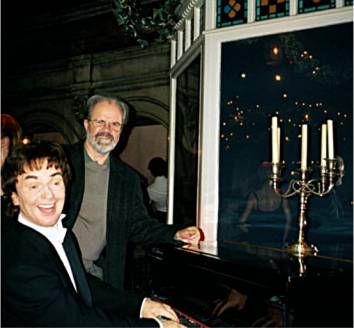 After yesterday’s enjoyment of places, the agenda for today was to enjoy people. We decided to go where all the rich and famous congregate.

After the usual delays on the Tube, we met Deane and Margaret only a few minutes late, but that was long enough for them to have made important contacts with significant people at the head of the line, so we were quickly ushered into the presence of the aforementioned celebrities. As we entered the reception lounge, we immediately recognised a number of old friends, like Fawlty Tower’s Manuel serving the drinks, and Dudley Moore at the piano. He seemed pleased with the advice I was able to give him. 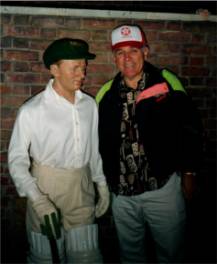 There were familiar faces wherever we looked - sportsman, stars of stage and screen, political leaders from all over the world. We couldn’t resist a photo or two along side these great people, just to prove we’d walked among them.

After a while, we began to notice that a number of the celebrities in the crowd weren't moving much. It turns out they were superb wax models at Madame Tussaud's, but it was often hard to distinguish the models from the real people. In fact at one point I wondered who that young cricketer was who was posing with the stunning likeness of Dr Woods. Upon closer inspection I realised it was the recently deceased Sir Don Bradman, so I guess it is Dr Woods who is real!

Madame Tussaud’s gave us the closest glimpse we’re likely to get of the Royals and other rich and famous people. The dungeon rooms also gave graphic representation of the dark and tragic side of English history. Before re-entering the real world, we were treated to a clever ‘Spirit of London’ taxi ride through London life styles over the past 400 years. 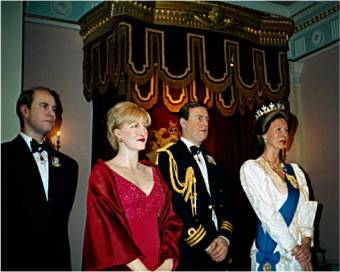