We were up and out early - down to the Putney Bridge before dawn. 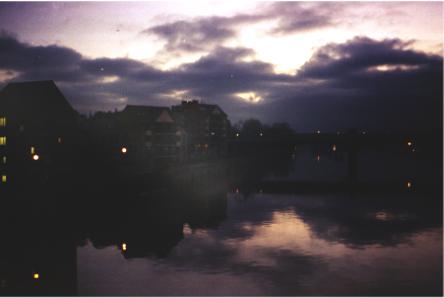 Caught the Tube to Victoria station and from the Coach Station, caught a National Express bus to Canterbury. It's about a 2 hour trip. After dropping us at Canterbury, the bus goes on a further 30 mins or so to Dover, so we noted that for future reference. 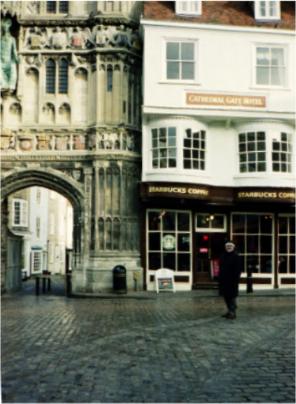 The Starbuck chain of coffee shops are never shy of securing good locations. This one right at the gate way into Canterbury Cathedral was irresistible. 'Blessed are they that hunger and thirst' - but we were in urgent need of some refreshment prior to entering the Cathedral for the morning service.

The 4th Sunday of Advent service was particularly moving in this historic setting, with its diverse congregation, beautiful choir, shafts of sunlight beaming amongst the great arches of the huge sanctuary.

The Dean's homily was thought provoking as he referred to the year just concluding, with the September 11 tragedy being now etched in history. He read from a writer's commentary on the tragedy in a newspaper on September 16. The advent of mobile phones had permitted loved ones, and later the world, to hear from many of the victims, just moments before their certain death. The overriding message from these phone calls was one of love. These people's last thoughts were not of the evil perpetrated against them, but of love. The central theme of the Christmas message also is of Love.

Follow the links below for more photos of Canterbury.