Well it's after lunch again, and this time I've got a 'free' in the Whitechapel all girls’ school where I had my ignominious introduction to Supply Teaching in UK.

Could there be anything better than teaching Yr 7 Muslim girls 'reproduction'? Well this time they thought I should start the day with Yr 11 Muslim girls doing Religious Studies, 'Racism and Islam’ was the topic for the day! I'm sure I'm getting more of an education than any of the students.

Tube workers are striking from 8pm tonight, so I have no idea how I'll get anywhere tomorrow. Ah, yes! -that Tube again. I had planned an evening at the Royal Academy of Music on Monday last for a concert of student compositions. But I didn't make it because of Tube troubles. I tried 3 times to make the journey by different routes with various combinations of buses and trains, but finally gave up at 8.45, having left home at 7.15 for an 8pm concert. There were massive delays due to signal problems at Barker St Tube Station, which happened to be my destination. I wonder whether the concert even went ahead because everyone must have had the same problem. The Tube system is very efficient when all's running well, but it's a huge frustration when things don't go as planned, which Murphy’s Law ensures is most of the time. I'm sure Murphy lived in London. 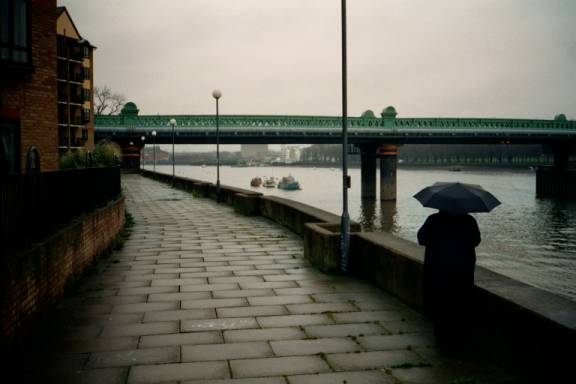 It's still quite cold and wet - my favourite possession is still my overcoat, followed closely by my brolly.

Schools here go on fabulous excursions - one last week had a class taking a day trip to Ireland for 'Economics,' - Yesterday's school had students paying their £10 deposit for a trip to Belgium, and today they're talking about an excursion to France. I haven't yet got my name down for any excursions, but I think I'd cope if they asked.

Tonight we ate out to a Piano bar called 'The Pitcher and Piano', just a short walk from home. Being totally ignorant of the local environment, we didn't realise that on this occasion the baby grand would definitely not be being used for making gentle dinner music, but rather as an extra place to put the drinks as the clientele sat around watching the Football on the big screen TV. The locals were rather bemused by these ignoramuses who lent over to ask 'Who's playing?' and 'Who's the team in white?' - England of course, playing Albania in a World Cup qualifying match! We lapped up a little more of the local culture, but were quite content to leave at half time, nil all, amazed again at the English obsession with sports where the main excitement is the thrill of something almost happening. I must admit that there were a few glimpses of magical skill, and it was exciting to witness all the loud 'Ooooh!' glissandos around us as the ball sailed almost near something important. I expect they were saving all the real action for the second half, and we'll read headlines tomorrow of the fantastic win or the shameful loss. As for us, we were just pleased to have had a lovely meal, being warmed by the generous open fire while the rain poured down outside, and observing another slice of English culture. I'll have to go back for some different culture when is piano is being played. (If it survives the World Cup, that is.)