On our drive to Inverness, we enjoyed the beautiful Scottish countryside. We found the people to be particularly warm and friendly, and their ways, sometimes fascinating - a refreshing change from big city life. In fact we were enjoying the country and the people, and the hire car so much, (having not driven since February),  that I commented that this trip was a big mistake - it was making me want to live in Scotland and drive a Citroen. I might feel differently if I had to live through a Scottish winter. Nevertheless, we were enjoying the drive.

Around lunch time we stopped in Pitlochry - a delightful town with character, culture, beauty and charm. 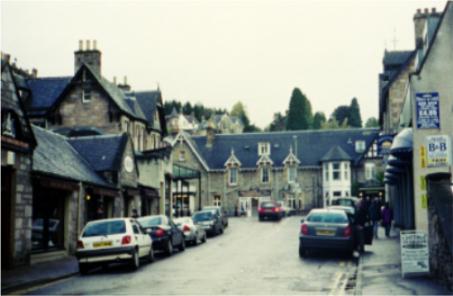 I am slightly embarrassed to have to relate the reason for Pitlochry becoming etched in our memory. It provided yet another public convenience story. Our experiences to date have frequently been of inconvenience rather than convenience, but this one was special. We followed the signs advertising the facilitates we needed for 30p. We were slightly curious as to why it only costs 20p in London, (especially considering that such venues in London have provided us with considerable entertainment in the past). But we ventured into the small structure anyway. We found ourselves in a space rather grandly labelled as 'Reception'. The experience got stranger by the minute. The next step was to approach a box-office type booth and pay the fee to the attendant. This was ok - it saved us having to find the change. But then she issued us each with a mauve 'Admit One' ticket. It wasn't as though it was crowded - it appeared she might get a handful of customers even in peak hour. So off we went on our separate ways, Margie looking around all the while, trying to find someone to give her ticket to, and I went in search of the popcorn and a movie. We emerged shortly afterwards, still clutching our tickets, having made use of an ordinary small country town toilet. We had a good laugh (- perhaps you had to be there) and moved on.